I’ve been wanting to get back to building ribs.  The garage bench has been piled too deep to get anything done, and now it’s been below zero for over a week solid.  Insulation or no, it’s damned cold out in the garage.  Too cold for epoxy to cure, and too cold to work.

So…  there’s a perfectly good work bench down in the basement.  8′ long and rock solid, built by Dad back in the 1960s.  It’s been pretty much completely covered up for the past several years with a collection of parts, partially-disassembled or -assembled prototype projects and assorted debris from the side business I was running, plus a CNC router that took up about 3′ of it.  I have cleared most of it off (much of it into a trash can).  The CNC machine is shelved for now; I’ll maybe resurrect it when needed at a later date.  It will probably come in handy for cutting the instrument panel and/or nose ribs.

The next issue is containers for the geodetic rib braces.  There are 24 braces used in each rib, all of which are of course slightly different.  Just enough so that none are interchangeable.  I was using paper cups to hold them in the garage, but it’s a completely unsatisfactory solution.  In the basement I think I’m going to try stapling taller plastic cups along the back edge of the bench and see how that works.

I’m not moving power tools down there from the garage, so new geodetics will be cut with a razor saw.  We’ll see how that works out…  it’s one of those jobs I wish I could set up a machine or fixture to do.  It’s 24 different lengths with over 40 different angle cuts, so I’m not sure how I’d make that work.  Even cutting them out in batches on the band saw meant fine-tuning each one with a sanding block before assembly.  It’s fiddly work and tedious as hell.  Classic gusseted ribs would be a whole lot faster and easier to build.  If I were starting this over I’d probably just depart from the plans and build them all that way; I’d probably have them all done by now.

Last night I tested out the upgraded steam box door with an hour of steam.  While that was going on I grabbed a chunk of scrap 2×4 and cut a second bending form.  I wasn’t happy with only being about to bend three lengths per run of the steam box.  I really need a better blade for that band saw…  this one is cheap, and while it will claw its way through a 2×4 it’s not something I would want to do regularly.

But — I have two bending forms, which means I can now do six lengths of capstrip at a time, so I won’t run out as often.  The steamer seems to work pretty well.  It’s not quite as perfect as if I had attacked it with a planer, jointer and an attitude of complete professionalism…  but I don’t have a jointer or planer, and even if I did what that steam would do to cheap flat sawn boards would be a real downer.  It works.

On the last several ribs I’ve been taking a different approach to gluing.  Early on I found that trying to glue up two ribs in one night meant working with epoxy that was starting to get a little stiffer than I would have liked.  I was using a popsicle stick to carefully spread glue in the groove, then on the braces, and assembling.  I was also having to fit each brace piece as I went along.  Each rib seemed to want about 10cc of glue, but I was getting a fair amount of it running down onto the plastic on the jig.

Now I pre-fit all the braces and mark them with their location.  I mix up the glue, dip the ends in the glue and put them in place.  I can work a lot faster and make less mess.  I’ve been seeing more left-over glue than I would like, as much as half what I mixed up.  I think about 7.5cc of glue per rib is more than enough.  I mixed 15cc for one pair of ribs and only had a little left over.  I’ve also been more careful about the glue mixing.  I had the ratios close enough to work well, since T-88 is not too critical.  Still, the darker B component was getting used faster than the A, and that tells me I’m not getting it completely right.  The stuff is pretty viscous, B much more so than A, and it takes a while to level out in the mixing cup.  Now I’ve been squeezing the B part into the mixing cup and walking away for a few minutes while it levels out.  Then I add the A component, walk away again, check back in a couple of minutes.  I can get it dead on 50/50 that way.  I may see about building a 100:83 balance scale to get it even closer.

Yesterday I did a little shop cleanup.  Not a lot, just enough to get done what I wanted to do.  I cut a length of 3/4″ x 3/4″ pine and cut a bunch of 1-1/2″ blocks for the second rib jig.  I got the work bench partially cleared off.  The box from the R/C Cub went underneath, and the plans sheet and wings were moved to one end of the bench.  I now have roughly half the bench covered by model airplane wings, while the other half is being used to build the real thing.  ‘Murica, as my kids would say.

So, I built the second wing rib jig.  I used the first rib from the first jig and blocked everything up.  I used some plastic sheet Lisa had picked up underneath it to prevent the glue sticking things together.  When it was all finished, I mixed up 20cc of epoxy and glued up two ribs.  That’s going to work as long as it stays cold, but the glue was gelling by the time I was finished.  If it warms up at all there won’t be time to do two at a time, unless I can find a way to pre-glue the capstrip grooves a lot faster.  I wonder if thinning out a portion of the T-88 and brushing it into the grooves would work.  For that matter, I wonder if pre-gluing the grooves is even necessary.

This morning I pulled both ribs from the jigs.  You can’t tell them apart, and you can’t tell them from the other four I had done.  Any differences between the six ribs I have done are slight enough they can be removed by sanding.  So, now I can double my production rate.

I spent some time cutting geodetic braces.  I stacked five of the thin capstrips, laid out the parts along them, and cut them with the bandsaw.  I now have enough parts to make half a dozen more ribs.  It’s slow going with the geodetic capstrip, because each one has to make three passes through the spindle sander to shave them down to 3/32″  Holy crap that’s tedious.  I may try using the table saw when the thin strip rip jig arrives.  Even if I can get them close enough to just make a single pass on the sander it would be a huge improvement.

I tried a different technique for applying the glue.  First I dry-fit all of the parts to make sure I didn’t end up with a brace with glue all over it that needed to be trimmed.  I marked the top and bottom capstrips with a pencil to indicate where the groove needs to be glued.  Then I pulled them out of the jig and used a trimmed-down popsicle stick to apply epoxy to the grooves.  Back into the jig, with the front and rearmost vertical pieces in place since those are impossible to install with the capstrips in the jig.  Then I proceeded as usual, installing all the other parts with epoxy.  It worked like a charm, and resulted in no glue running down where I didn’t want it.  We’ll see how this rib looks when I pull it out of the jig tomorrow…  and we’ll see how closely it matches the first one.  In theory they should be identical, but I’ve  never done this before, so… 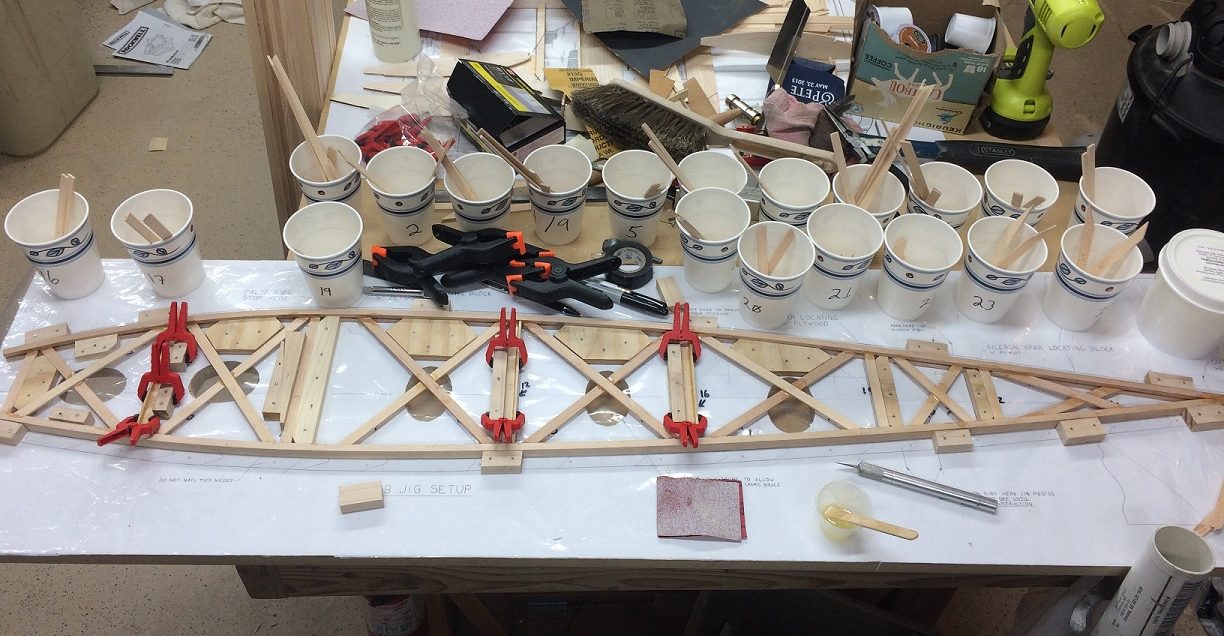 After a couple hours of cutting and sanding geodetic pieces, I finally mixed up a little T-88 epoxy and glued up the first rib.  Kind of a milestone — the first full size wooden rib I’ve ever built.  Can’t wait for tomorrow when the glue is hard enough to pop it out of the jig.  Then we’ll see whether this one gets used on the airplane, or used for destructive testing.

Cutting those geodetic pieces is a lot of tedium.  Even more so since I didn’t send the strips before cutting, so i then had to sand each piece individually.  next time I’ll clean up the capstrip prior to cutting.  I was cutting two pieces at a time, with the capstrip stock taped together.  I may go for 4 or 6 pieces at a time as I get better at it.  And, I need a better solution for holding the pieces.  I knocked three of those cups off the bench at various times while assembling it.  Things will be a lot easier if and when Pete’s R/C Cub gets off my workbench.